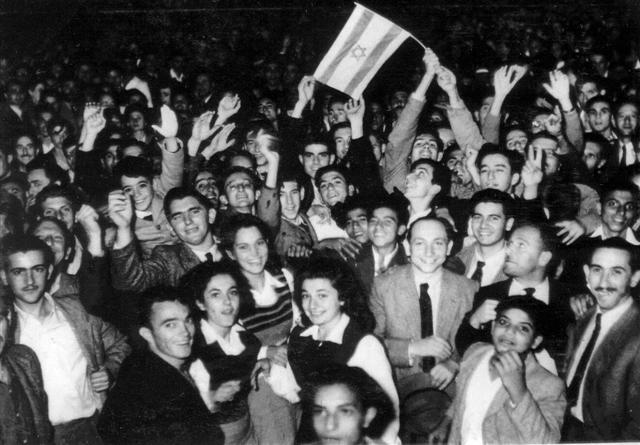 Celebrations upon hearing the news of the Partition Plan

Seventy-two years ago this week, the U.N. voted on the Partition Plan, paving the way to Israel’s birth. A letter written that night from Jerusalem captures the community’s joy, gratitude, and trepidation.

Mordecai Chertoff moved from the United States to Palestine in 1947 as a young man, writing evocative letters to his family back home and capturing the drama of Israel’s birth. These letters were collected and annotated by his son, Daniel Chertoff, in a newly published book, Palestine Posts: An Eye-Witness Account of the Birth of Israel. This letter was translated by Rachel Chertoff Kaminetsky.

And so it was—And it came to pass at midnight!

And a redeemer will come unto Zion!

My dear family—Friday afternoon, before Shabbat, we sat crowded together and fearful around our huge radio in the newspaper office, and heard the proposal to postpone the vote—Our eyes dimmed and our blood froze in our veins: They’re “pulling one over on us,” as the children say. After the broadcast we walked through the silent and sad streets of Jerusalem, and found no comfort. We envisioned military posts at every corner and machine guns, explosions and sirens, the terror and suffering renewed. Then comes a clear Shabbat morning under the scalding sun, and the people walk about with some sort of hope and prayer on their lips, and they stream to the Western Wall to pray with the chief rabbis. I visited Rabbi Herzog before going to the office to hear the latest broadcast, and to work with no logical hope of victory but with a great sense that despite all, we will triumph. Friends on the street and at the cafe ask me, the journalist, how the debate will end, what the night will bring and I answer their prayers with a quiet “it will be okay.” And until 11:30 [pm] I stand hunched over the desk, gloomy and irritable and answer every question with only “It will be okay.”

Dr. Aranha begins, and the delegate from Lebanon speaks, and another and yet another after that, and “our Herschel” and then Gromyko (hero of the Hebrew state) demands a vote. And suddenly, amid all the chaos, the chairman announces a vote not regarding France’s proposal, but on the Partition Plan itself. We sat glued to our seats, each of us with a piece of paper to calculate his prophecy, and pen in hand: [And thus he would count:] One, one and two, one and three… thirty-three: A great, joyous cry and silence, the silence of the moment we’ve awaited for two thousand years. And in the narrow, smoke-filled room, heavy with tension and oppressive concern, one long sigh of relief and fumbling for cigarettes and pipes. As though the conductor of the dance gave a secret sign—a silent Mazal Tov from the depths of the heart.

We left the room, each to his work, and within fifteen minutes the first paper went to print. “Mazal Tov”—Cognac bottles are opened and all drink to the Hebrew state. Blessed are we who live in this time and stand on the Holy Land at the time of the great declaration. We embrace and tears of joy glimmer in each eye.

There were those who heard the broadcast and others who called to ask “what’s new”—but Jerusalem, dead and deserted by ten at night, was resurrected. We heard a tremendous roar from Ben Yehuda Street “David Melech Yisrael chai chai vekayam” and the roar is repeated again and again from the throats of the youth of Jerusalem banding together in a huge hora around an armored police car. I left the office with a young woman who had come to hear the news with me and we raced up the street, we ran and danced and ran and laughed and cried interchangeably without even noticing our tears. We got on a large truck with a great crowd and were like grains of sand—people swarming to the Jewish Agency buildings. And another hora in the building courtyard, men and women in pajamas, half-dressed but completely awake. One young man with a trumpet walked the entire city and people followed him to the Jewish Agency. Police cars drove people to the building, and suddenly they started chanting “get a flag, get a flag…” and suddenly the blue and white appeared on the balcony and a jubilant and fresh “Hatikvah” which we had never dared to hope for and never anticipated, erupted from five thousand mouths. And after that: “Golda, Golda, Golda…” and she appears and speaks simply and touchingly. One old man, tears streaming down, covering his face and disappearing into his white beard, mutters to a six- or seven-year-old grandson “Remember this, remember, this is what I waited forty years for.” Tears and laughter intertwine.  We sing, we fear to speak, to express what we are feeling.

Now I must get back to the office for the second edition, I approach an armored vehicle with the young woman and ask for a lift, and wishing us, “Mazal Tov,” the British policemen in the car lift us on and take us to the door of the building. After the work is done (4:30 AM) we rejoin the singing and dancing and walk through the full, rejoicing streets. Echoes of “David, Melech Yisrael…” from the hora circles bounce off every wall. They rise to the heavens and descend like a divine voice, cool and clear and pure and ringing. And all around, the children are climbing up onto every type of vehicle till there is no space, and no way to recognize what kind of vehicle is under them. The little ones shriek with glee and the older ones cry and embrace and run in every direction to see the dancing and the singing and all the people greeting our new state.

We did not sleep. Who could sleep at such a fateful time? I gathered friends at my home and we drank “L’chaim” again and again. We returned to the Agency and heard a few lines of Ben Gurion’s address and we sang and danced all over again, as if we hadn’t run around all night without sleep. All night and all day Jews danced and cried and laughed and  repeated “Mazal Tov,” and “L’chaim,” again and again. And we realized the reason the vote was delayed from Friday to Saturday: The Messiah does not come on Shabbat!

Even now, twenty-four hours after the birth of the State, I sit writing in the office (waiting to finish the second edition) and it is as if a lump is stuck in my throat and I fear I will burst into tears at any moment, unseemly for a hard-hearted journalist.

Only one thing is missing to complete my joy: If only you were here too to merit seeing the joy of Jerusalem. I see Father’s image before me in all the dancing, laughter and tears, and his melancholy words: “Not in my generation—only my children and my children’s children will get to see this.” Indeed, you were mistaken, and now you must make aliyah and repent. And Mother? You would weep, your face beaming, as it did when I parted from you before making aliyah. And my dear Naomi and Gershon – why did I merit to experience this happiness, while you remain there, in the Diaspora, to read and rejoice from afar? But there is no use complaining: I am representing our family here in Jerusalem, and thank G-d one of us was privileged to witness the first signs of the Redemption and to hear the footsteps of the Messiah – through the feet of Israel’s youngsters dancing in the streets – and to feel how close it is.

Who shall sing us the song of this day, without Yehuda HaLevi and Bialik and the prophets, the great poets of Israel? Who shall describe this great day and its joy? It is in the heavens…

And we have already paid with our first victims: Seven Jews were murdered today, and who knows how great the number will grow until the day of peace will come to us? But there are no doubts whatsoever. Anyone who heard the “Ani Ma’amin” of the celebrating people, and saw the people striding through the streets of Jerusalem, does not fear what is to come.  “David Melech Yisrael, chai, chai, vekayam…”

Truly, everything will be okay.

Soon I will go to bed, after two days without any sleep at all. But I am not tired: This great miracle stands before me and robs me of sleep- we must be worthy of it!

How was the news received in New York?

And is there not a special blessing, one we have not used for any other event, for any other news, that we can recite now? “Shehechianu”[14] is appropriate—but not enough. And yet, until that blessing is found, or that song, that will sing our rebirth: Blessed are You, Lord our God, King of the Universe, who has granted us life, sustained us, and enabled us to reach this occasion. Amen.

With much love and great and blinding joy,