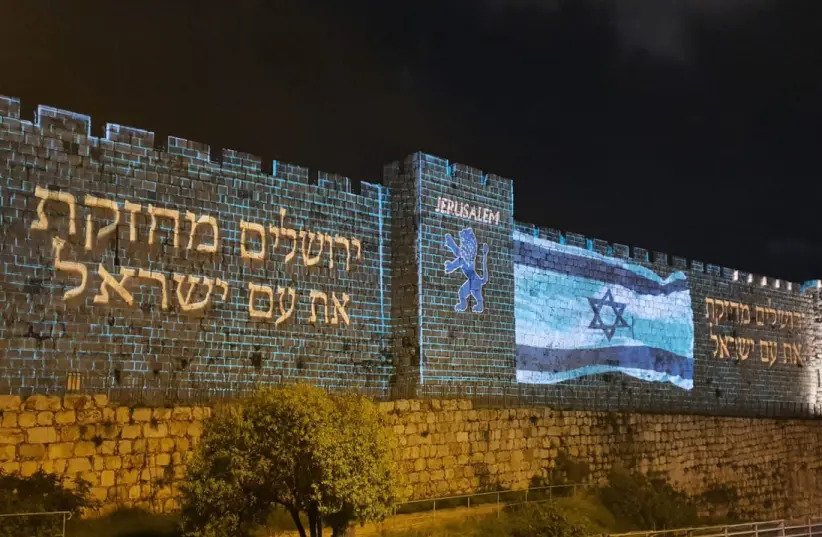 Jerusalem shows support to the entire people of Israel with the flag displayed on the Old City Walls on Thursday March 19 2020(photo credit: ARNON BOSSANI)

Jerusalem: from closed to closure

David Ben-Gurion understood how devastating the fall of Jerusalem would be to all citizens of the nascent state of Israel. He said, “If the Land of Israel is the heart of the Jewish nation, then Jerusalem is its heart of hearts.”
‍

During Israel’s War of Independence 72 years ago, residents of Jerusalem were virtually confined to their homes, in fear for their lives and worried about access to food and water.


Before being attacked by the surrounding countries following its declaration of independence on May14, 1948, Israel had already been locked in conflict with the local Arab community that was aided by outside irregulars. That part of the war, referred to by historians as the “civil war,” began on November 30, 1947, the day after the UN voted to partition Palestine into two states, a Jewish one and an Arab one. Almost immediately, the Arabs, who controlled the roads to Jerusalem, began to strangle the Jewish parts of the city.


With little industry and natural resources, Jerusalem was completely dependent upon supplies from the outside. David Ben-Gurion understood how devastating the fall of Jerusalem would be to all citizens of the nascent state of Israel. He said, “If the Land of Israel is the heart of the Jewish nation, then Jerusalem is its heart of hearts.”


In December 1947, Dov Joseph, a Canadian lawyer who had immigrated to Israel in 1918, was appointed to head the Jerusalem Emergency Committee, and later became military governor of Jerusalem. In his memoirs, he writes that by February 1948, there were serious shortages of meat, fish, milk, eggs, fresh fruit and vegetables. The city required about 30 trucks per day to supply it, but by March 1948, none could negotiate the crippling siege. The Arabs also cut off the water supply. Jerusalem was desperate.


With Jerusalem in danger of starvation, Joseph had to quickly develop a plan. He immediately surveyed all water and foodstuffs on hand. All the food moving in and out of the city and food warehouses was carefully monitored. Rationing was instituted but there was not enough food to fulfill peoples’ minimal allotments. People were encouraged to plant vegetable gardens, hydroponics were set up on rooftops, and radio programs transmitted recipes for halamith, a weed that tastes a bit like spinach and grows freely throughout Jerusalem.


There were demonstrations of how to cook without fuel or electricity and how to make primitive stoves out of blocks of wood. By April 4, ordinary food convoys were discontinued.


Supplying water was an even bigger challenge. The Arabs controlled the pipelines into and within Jerusalem but there were some water sources in Jewish hands, including cisterns dating back to ancient times. In order to stretch the limited supply, a ration of seven liters per day was instituted for drinking, cooking, washing and all other requirements.

FUEL WAS also in short supply; there was enough for cooking but not for heat, and Jerusalem is cold during the winter and early spring. With little fuel, electricity had to be limited to 12 hours per day.


Joseph was careful not to allow any distinction between rich and poor. Since the rich were assumed to have some reserves, poorer neighborhoods were fed before richer ones.


In addition to the lack of essentials, Jerusalem was a dangerous city. There was constant sniping and mortar bombardments that would go on day after day and hour after hour. It was dangerous to leave one’s home and almost impossible for businesses and schools to function. People were idle – the city was dark and gloomy, there was no life in cafes and cinemas were closed.


But everyone pitched in for the defense of Jerusalem. There was a home guard which by June 1948 numbered some 3,200 men and women in Jerusalem, well-organized to carry out a range of functions including fighting fires, organizing blood donations, caring for refugees, manning observation posts, etc.


There was a secret radio station, Kol Hamagen, set up by the Hagana to keep citizens informed and to raise morale by broadcasting accounts of bravery and exceptional conduct.


The Palestine Post, which later became The Jerusalem Post, was an important source of information for the large English-speaking population of the city and did not miss even one day of publication - including the day on which its offices were destroyed by a bomb!


The siege was eventually alleviated by the “Burma Road,” a road built to bypass the dangerous chokepoint along the Tel Aviv-Jerusalem highway near Arab-controlled Latrun.


In his memoirs, Joseph writes, “The spirit of the people was something which one looks back on today as nothing but a miracle of courage and fortitude.”


The writer is the author of Palestine Posts: An Eyewitness Account of the Birth of Israel, (Koren, 2019), which is available via Koren, in bookstores and through Amazon