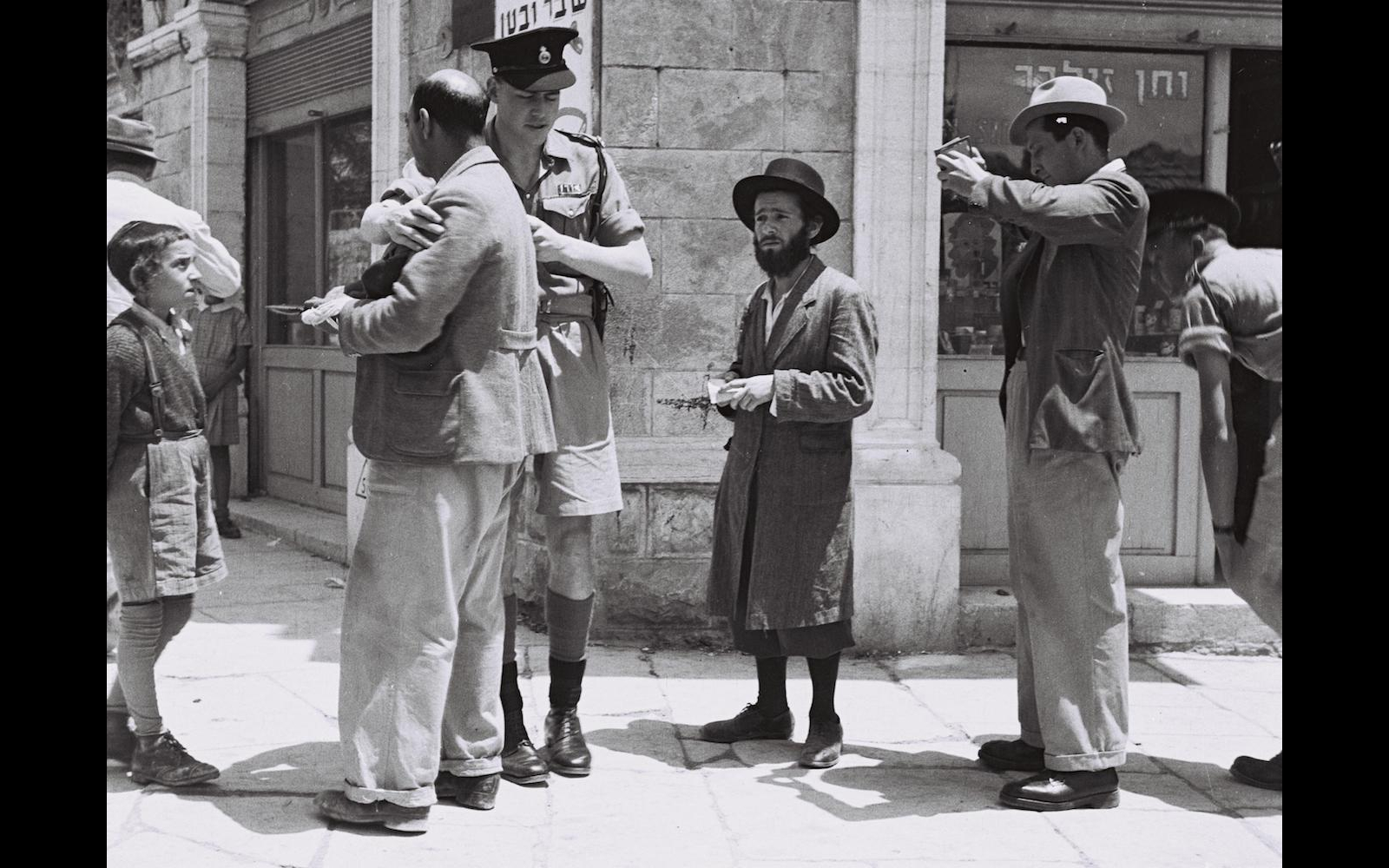 A British policeman checking papers of passers by on a street in Jerusalem, during the British Mandate, 1947 (Wiki Cc)

On the third day of the Six-day war of 1967, Israeli paratroopers entered the Old City and reunited Jerusalem. From the end of Israel’s War of Independence (1947-1949) until the Six-day war, East Jerusalem, including the Old City (and Judea and Samaria), were controlled by Jordan while Israel held the western part. During that time, in contravention of International law, Jews were not permitted to enter the Old City nor any of the Jewish holy places in Eastern Jerusalem. Twenty-seven synagogues, including the magnificent Hurva Synagogue, were razed by the Jordanians. For 19 years the city was sadly divided.

But during the period immediately before, and during, Israel’s War of Independence, Jerusalem was divided in far more complex ways – across “three dimensions.” It was a hopeless patchwork of different ethnic neighborhoods, British security zones, and subject to harsh curfews.

David Ben Gurion described Jerusalem at that time as a ‘hodgepodge’ of neighborhoods. Something like 28 different ethnic groups made Jerusalem their home. Even though the Jews made up approximately 60% of the population of Jerusalem at the time, Jewish areas were not contiguous, but rather, “islands” dotting the city and, in some cases, bordering Arabs areas: Jewish Geula abutted Arab Wadi al-Joz; Jewish Mekor Hayim was next to Arab Baka, etc. The situation in the Old City was even more extreme – the Jewish quarter was enclosed within the Arab and Christian sections.

Compounding the challenges for the Jews was the fact that the Arabs controlled the roads, both within Jerusalem and those leading to the city. The Arabs used this advantage to place the Jews under siege from December, 1947 until June, 1948 when a bypass road was finally available. Arab snipers made walking from neighborhood to neighborhood a dangerous proposition.

Superimposed on this crazy quilt of ethnic sectors were the British security zones. Following World War II, as talks on the question of Palestine intensified, British troops in Palestine struggled to protect themselves from the warring Arab and Jewish sides, and from Jewish terrorist organizations. The bombing of the King David Hotel during the summer of 1946 by the Irgun resulted in the deaths of 91 people of whom 28 were British. It was a watershed event. The British established security zones, each surrounded by barbed wire. One zone encompassed the railroad station, St. Andrews Hospice, and the neighborhoods of Katamon, the German Colony and Baka, within which most British personnel lived. A second included Terra Sancta on Keren Hayesod Street, the YMCA, the King David Hotel, the Jewish Agency building and parts of the neighbor­hoods of Rehavia and Talbieh. A third zone, known as the Jerusalem “fortress,” included the Russian Compound, the Anglo-Palestine Bank, the Central Post Office and part of Jaffa Road. The Jews jeeringly referred to this area as “Bevingrad” – a neologism comprised of the name of the reviled British for­eign secretary, Ernest Bevin, and of the Russian city, Stalingrad, which had been besieged by the Germans during World War II. A fourth zone surrounded the Schneller compound which had once been an orphanage but had been turned into a British military camp.

These security zones added a second level of division to what was already a hopelessly fractured city. The paperwork needed to pass through the zones made movement for residents, especially Jewish inhabitants, exceedingly difficult. In his memoirs, US delegate to the Anglo-American Inquiry on Palestine (1946) Bartley Crum describes the situation:

“Jerusalem was an armed camp…barbed wire in great coils was everywhere, tanks could be seen at various locations, special pill boxes had been put above the entrance of the [King David] hotel, and on the roofs, and on the lawn of the imposing YMCA building across the street, soldiers manning machine guns surveyed all avenues of approaches” (ps. 160-61).

During the war, my father, Mordecai Chertoff, was an editor at the Palestine Post and simultaneously, a member of the then illegal Haganah. A godsend to the army, his press credentials gave him the freedom to move about the city with unfet­tered access to almost every location. Referring to his press pass in a letter to his parents during the summer of 1947, he wrote that his “little green book is almost armor-plate.” Mordecai used this freedom to visit and sketch British positions and sensitive security points, especially within Bevingrad. There are many such sketches in the Haganah Museum (although I did not find any that were definitely his work).

The third dimension of the complex situation in Jerusalem was the frequent curfews imposed by the British on the Jewish neighborhoods, usually following attacks by Jewish underground groups. From January 1, 1946 through October 20, 1946 Jewish Jerusalem was under curfew for 57 days. This includes the dusk to dawn curfew following the bombing of the King David Hotel (16 days) as well as other curfews, some lasting 22 hours/day.

With the departure of the British and the removal of the security zones in mid-May 1948, the fight for Jerusalem began in earnest. The battle for the Old City occurred during the second half of May. During the night of May 18-19, the Palmach managed to take the Zion Gate entrance to the Old City but were unable to hold it. Ten days later, the Jewish Quarter surrendered and was systematically destroyed by a mob. It would be nineteen years before Jerusalem would once again be an integrated whole.

Today, Jerusalem is a unified city. And while it would be an overstatement to claim that it is a model of racial harmony, Jews, Christians, Muslims and other ethnic groups, nevertheless coexist peacefully. Holy sites are open to all, Arabs and Jews share Railroad Track Park leading to the “First Station” commercial center, Arabs and Jews work side by side in many shops and business and perhaps most importantly, teams of Arab and Israeli doctors, nurses, pharmacists and other health workers, together battle the Coronavirus with excellent results. The fissures that once divided Jerusalem continue to slowly fade.