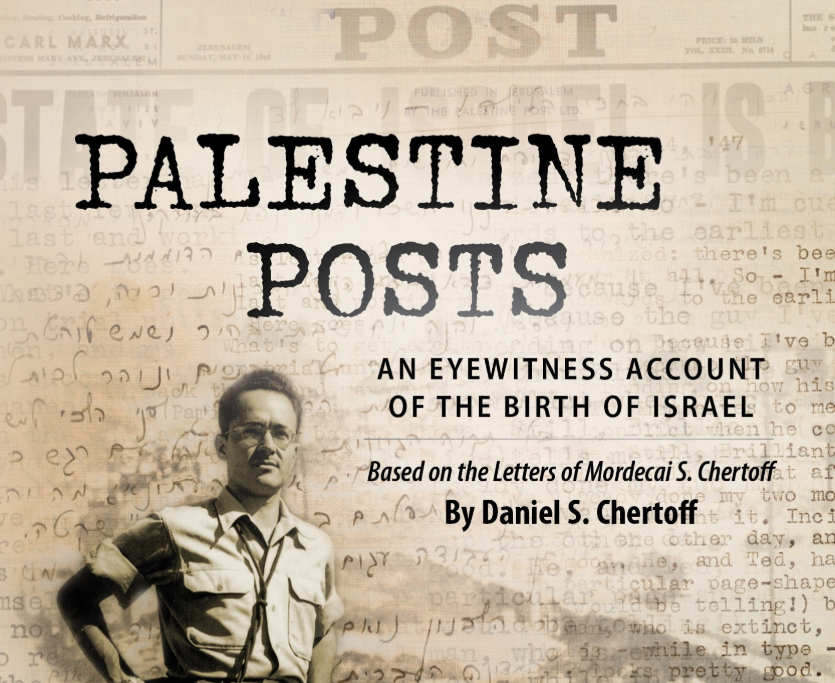 Shortly after I finished writing the first draft of my book, my daughter, Rachel, said to me, “I think you like him more now.” I was taken aback by her observation but had to admit that it was true. But why? What did I learn about my father from his letters? What changed? I had just finished writing the first draft of a history of Israel’s War of Independence. It was based upon the letters my father had written from Israel to his family in the United States during the period leading up to and including the war.

I had heard these stories from my father many times and was basically tired of them. I knew he had been the foreign news editor and then war correspondent for the Palestine Post, an intelligence officer in the Haganah, when that was still illegal and dangerous during the British mandate, and how he had been embedded with the Palmach, Israel’s elite forces. I had even helped him write his memoirs. But he had never told me that there were letters. I found them only after he died.

The ambivalence I felt about the letters reflected the ambivalence I felt towards him. I loved him and treated him properly, but didn’t really like him very much and, as an adult, kept him at arm’s length. He had been a very self-involved parent who always put himself first. He didn’t seem especially interested in me or my sister, Jocelyn, and did many rotten things to me – nothing actionable or sadistic, but thoughtless and destructive, things to which he readily admitted when I confronted him many years later. Further compounding the problem was the fact that my mother finally ended their dreadful marriage after discovering that he had been having an affair, something I suspect she, too, may have been guilty of. In order to curry her favor, I made the strategic decision to snub him, not completely—I still saw him and communicated with him—but by being reserved and cold. Nevertheless, 25 years later, after his second wife died, I encouraged him to move back to Israel, where I had been living for over 20 years, so that I could take care of him. Friends tell me that I “stepped up” and took good care of him for the last six years of his life. But I continued to withhold the affection and respect he craved.

Initially I thought I would just scan the letters to preserve them in case any of my children would become interested at some point in the future. But then I started to read them and discovered details about historic events, not-yet famous people, and fascinating family and social matters. I was struck but how good a writer he was—his images were vivid, detailed, and visual. He alluded to events I had vaguely heard of but was hungry to know more about. I was touched by the fact that he saw these events in the context of Jewish national and religious history. He was extremely idealistic. He had no doubt that the Jewish state would come into being—through a combination of religious faith and faith in the common Israeli soldier—even if he worried about its exact character.

His correspondence with his father reflected this faith. Their communication was in Hebrew and filled with biblical and rabbinic allusions, not to show off, but because that was the only way the two of them could express their feelings to one another. It was a kind of short hand between two extremely literate people which expressed far more than just ideas and thoughts. I knew that both of them had good Hebrew but was amazed by how poetic and rich it was.

There was another very surprising dimension of their correspondence–it was extremely intimate. They were strongly attuned to one another, sensitive to each other’s sensibilities, opinions and needs. My father depended upon his for advice, guidance and approval. My grandfather actively participated in all of my father’s important decisions, and went so far as to take responsibility for them, even though the two of them were 6,000 miles apart and my father an adult of 25.

My grandfather shared my father’s determination to see the state come into existence. He had escaped Czarist Russia in 1900, fretted over World War I, mourned the destruction of European Jewry during World War II and was wracked by stress as he watched the political and military threats to the nascent Jewish State. Although Orthodox, he was not waiting for the Messiah to create the state. Like Rav Kook and other early religious leaders, he loved every Israeli soldier and mourned every casualty.

I barely knew my grandfather. He died when I was young and we had never lived near my grandparents. But I fell in love with his written persona and am convinced we would have appreciated one another. I think I have his temperament and share several of his attributes, especially his excessive empathy and his almost obsessive concern for the welfare and development of his children and wife.

My father’s letters had an immense impact on me.

First of all, many of them are beautiful and reflect a sensitivity and perceptiveness that my father rarely exhibited when I was growing up. This is especially true of his description of the night the UN voted to create the Jewish State. He recognized that he was living in historic times – the most critical in Jewish history for the last 2,000 years – and wrote about them with great sensitivity. I am proud of the role he played in its realization and awed by his faith and how naturally he locates events within the sweep of Jewish history and literature.

Recognizing this negotiation between fathers and sons puts our relationship in a broader context and leads me to wonder how my descendants will remember me. Does the fact that one of my sons was particularly close to my father reflect the easy closeness that alternate generations can feel for one another? Is it similar to the intense attachment I feel to my grandchildren?

The letters made everything real. I now see a far more complex person, one who struggled to understand. I wonder how to continue to enjoy, develop and honor the positive elements he bequeathed to me while minimizing the negative ones. My family assures me that I’m “not like him,” but deep down I know that I have traits of which I am not proud and must continue to work to keep them at bay.

What started as a unique opportunity to immerse myself in an historical period that is precious to me turned into an opportunity to come to grips with my father, to meet him as a young man and to appreciate his struggles. That I have lived in Israel for more than 30 years, and all of my children have served in the army and are Zionists, is a testament to both my parents. My newly discovered appreciation of my father is intertwined with a seminal period in the history of Israel. I think he would be thrilled.