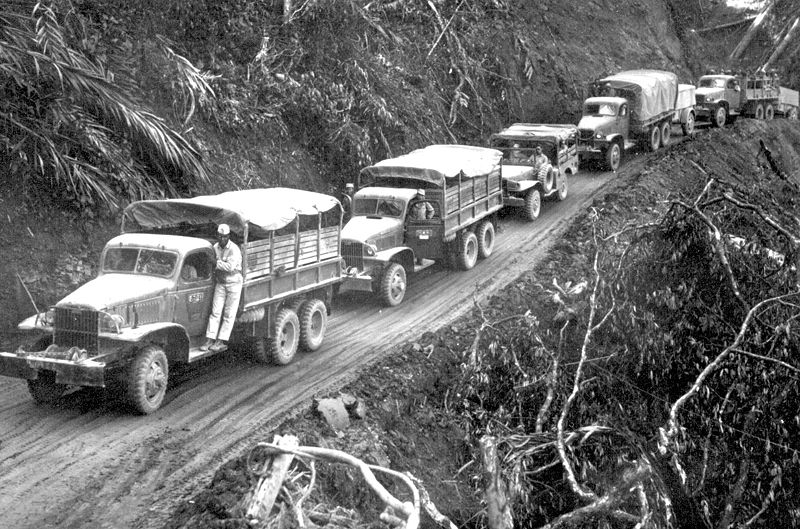 Originally published on Times of Israel on April 24, 2020

On June 11th, less than a month after Israel declared its independence (May 14, 1948) and the conventional war began, Yitzchak  Rabin, the 27 year-old commander of the Harel brigade of the Palmach, gave my father, Mordecai Chertoff, and his fellow journalist, Azariah Rapoport, a note saying: “take these two men to Tel Aviv, they’re okay, and they help us.” This is how my father, war correspondent for the Palestine Post, and Azariah who held a similar position at Ha’aretz, became the first civilians to travel on the just opened Burma road. The road was critical to breaking the siege of Jerusalem. But the two reporters’ experience with the Burma road actually began at the end of May, with the search for the route to bypass the Arab guns at Latrun which made travel to and suppling Jerusalem almost impossible.

The Jewish neighborhoods of Jerusalem came under siege almost immediately with the UN vote for Partition on November 29, 1947. The Arabs controlled the roads leading to Jerusalem, including the main, Tel-Aviv – Jerusalem highway along which were many Arab villages, of which Latrun was the most strategic.

With little industry and natural resources, Jerusalem was completely dependent upon supplies from the outside. The city required about 30 trucks per day to supply it, but by March, 1948 there were none due to the crippling siege. The Arabs also cut off the water supply. Jerusalem was desperate. Ben Gurion appointed Canadian lawyer, Dov Joseph, military governor of Jerusalem to manage the situation. Joseph immediately created an inventory of water and foodstuffs and instituted rationing. He also developed a broad program of cultural as well as physical activities to raise the morale of the residents of Jerusalem who could no longer work and whose lives had been severely disrupted. But the situation was becoming increasingly dire.

During the spring of 1948, the Jews made many attempts to open the road to Jerusalem and break the siege, including military operations Nachshon (April 6), Harel (April 16-21), Yevussi, and Maccabi (May 3-4). The main choke point, Latrun, changed hands several times but ultimately remained in the hands of the Jordanians – until the Six-day war nineteen years later.

By the end of May, although locked in battle with five Arab armies, Ben Gurion understood how devastating the fall of Jerusalem would be to the citizens of the nascent state of Israel. He said “If the Land of Israel is the heart of the Jewish nation, then Jerusalem is its heart of hearts.” He ordered the army to find an alternative route.

In his detailed article, “The Burma Road Story” published in the Palestine Post on June 22, my father describes how 3 soldiers from the Palmach had set out to find a route that would bypass the main road near Latrun. He wrote that “It began with three men on foot, moving down through the Judean hills in the darkness to the thunder of cannon and crack of rifles at Latrun….The three were picked from Palmach’s ‘Haportzim,’ the unit which had learned every inch of the way during the original road-clearing operations, “Nahshon” and “Maccabi.” My father was at the base camp from which the men set out. Two nights later he and Azariah set out along the same path. Trucks could travel from Tel-Aviv only until the steep slope that interrupted the path to Jerusalem. Initially, they would come as far as possible and their cargo was offloaded and carried by porters to the trucks waiting on the other side of the slope for rest of the trip to Jerusalem. Meanwhile, the Jews worked frantically to make the steep portion navigable for trucks. The work, which included laying a pipeline for water, was essentially complete, and the road usable, by June 10.”

Parched and starving Jerusalem now had water and food again. While the practical aspect was solved, the diplomatic dimension was more complex. The truce that the UN had been frantically trying to conclude came into force on June 11. One of its provisions was that neither side could use the truce to improve its position. UN mediator Count Folke Bernadotte (assassinated by the Lehi three months later in Jerusalem) insisted that this provision applied to Jerusalem – the siege would continue. He wrote in his memoirs that “It was…completely in accordance with the spirit of the truce that Jerusalem should have as much food and provisions when the four-weeks’ truce expired as it had now” i.e., Jerusalem’s hunger would not be slaked. The Truce Commission even decided how many calories the residents of Jerusalem needed. In his memoirs, Dov Joseph rails against this interpretation, noting bitterly that “It seems a savage irony now if these United Nations officials, appointed for humanitarian purposes, should have devoted so much of the time and energies to trying to make sure that the people of Jerusalem should find themselves close to the starvation level when the truce ended.” He noted that the US member of the commission insisted that the food quota for the Jews be reduced even further. “Even children’s clothing was not allowed into Jerusalem without the Truce commission’s prior approval” To add insult to injury, the Commission often delayed convoys bringing in even minimal supplies.

Creation of the Burma Road was a turning point for Jerusalem and was probably critical for its survival as a Jewish city. It was in use for 6 months, until road 44 could be built. The water pipeline, called the Silwan pipeline, remained in use until 1953. My father concluded his article: “Three men went walking on a cloudy summer’s night down the hills of Judea, and the siege of Jerusalem was broken. Whatever the diplomatic or fighting war may bring, Jerusalem has its own lifeline to the coast.”