100 Years of Peace-making: UNSCOP & Other Reports 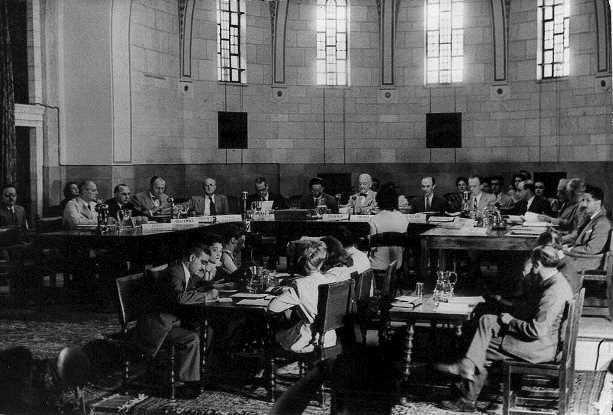 This Friday, May 15, will mark the 73rd anniversary of the establishment of UNSCOP, the UN Special Committee on Palestine. UNSCOP was the last of at least half a dozen efforts undertaken between the end of World War I and the declaration of the State of Israel on May 14, 1948 to resolve “the question of Palestine.” Others include the King-Crane Commission Report (1919), the Peel Commission (1937), the Anglo-American Committee (1946), the Morrison – Grady Plan (1946), and two proposals from UN Truce Mediator, Count Folke Bernadotte (1948). UNSCOP did an outstanding job and it is worth revisiting their work. But first, consider two earlier efforts: the King Crane Commission and the Peel Commission.

The King-Crane Commission (formally, the “1919 Inter-Allied Commissions on Mandates in Turkey”) began work in June, 1919. Its mandate was to determine what areas formerly held by the Ottoman Empire were ready for independence and self-government. In what was probably the first ever survey of Arab public opinion, the Commission took the wildly unique approach of asking the local population what they wanted. The Commission received over 7,500 petitions from residents of what eventually became Syria, Lebanon, Iraq, Trans-Jordan and Palestine. The survey revealed that the residents wanted an independent, democratic country made up of a united, “greater” Syria. They were also overwhelmingly opposed to Zionism, Jewish immigration, and the establishment of a Jewish state.

The American members of the committee were concerned with the morally correct course of action but were undermined by the colonialist ambitions of the French and British who, via the Sykes-Picot Agreement, had already divided the areas between themselves. Since the survey results contradicted British and French geo-political interests, their members dropped early in the process. The resulting report was called “Report of the American Section of the International Commission on Mandates in Turkey.” The US State Department, however, decided that publication “would not be compatible with the public interest” and suppressed the report for 3 years.

The Commission believed that the two principles of the Balfour Declaration were mutually incompatible: it was not possible to establish “in Palestine a national home for the Jewish people” without prejudicing “the civil and religious rights of existing non-Jewish communities in Palestine.” They recommended that Palestine be included in a united Syrian state under a single mandate with the holy places under international control. Eventually, France was awarded the mandate for Syria while Britain became the mandatory for Mesopotamia (Iraq) and Palestine (including what would later become Trans-Jordan).

Only one year later, the San Remo Conference, whose 100th anniversary was celebrated recently, renewed the European commitment to the establishment of a Jewish state as expressed in the Balfour Declaration and confirmed the British mandate for Palestine largely on condition that it implement the Declaration.

The Arabs expressed their strong opposition to Jewish immigration and land purchases by frequent uprisings and attacks. The British responded to each with further restrictions on Jewish immigration. But with the rise of Nazism in Germany in the early mid-1930’s, and the closing of American and Canadian gates, Palestine seemed like the only possible destination for Jews fleeing the Nazis. This was among the primary factors for the great Arab rebellion of 1936-1939.

In response to the uprising, Great Britain established the Palestine Royal Commission, better known as the Peel Commission, to investigate the causes of the Arab unrest. The Commission concluded that the uprising resulted from the desire for independence and from fears of being overwhelmed by the Jews who were streaming in, buying land, and establishing a strong industrial and agricultural infrastructure.

In its review of the historical context, the Commission described the extensive and long-lived ancient Israelite kingdom and the arrival, hundreds of years later, of Arabs “from the Arabian desert.” In what to contemporary ears sounds extraordinary, the Commission noted that some Jews remained in the area during the Jewish exile and “had clung throughout the centuries of Moslem occupation to what had once been their national soil” (emphasis mine).

The report, issued on July 7, 1937, stated that the mandate had become unworkable and recommended partitioning the area of Palestine (minus Trans-Jordan) into Jewish and Arab states. The Commission explained: “Their national aspirations are incompatible. The Arabs desire to revive the traditions of the Arab golden age. The Jews desire to show what they can achieve when restored to the land in which the Jewish nation was born. Neither of the two national ideals permits of combination in the service of a single State.” The Peel Commission is critical because it was the first time that partition had been recommended. The Zionist Congress rejected this specific plan but accepted the idea of partition. The Arabs categorically rejected the idea of a Jewish state in any area of Palestine, no matter how small.

The following year Britain established the Woodhead Commission (the “Palestine Partition Commission”) to flesh out the details for partition. It concluded that partition was not practical and the British government abandoned the idea. Barely a year later, England entered World War II.

In early 1947, less than two years after the end of the war, its resources severely stretched, frustrated by incompatible Arab and Jewish demands and unrelenting violent attacks from both sides, Britain made good its frequent threats to refer the problem of Palestine to the United Nations. The UN appointed a special committee to study the situation and make recommendations. The UN Special Committee on Palestine undertook a research process which included extensive preparation, a 2,200 mile, fifteen-day tour of Palestine, a five day trip to Lebanon and Syria, a visit to the king of Transjordan in Amman, a 2,700 mile seven-day tour of displaced persons camps in Germany and Austria, thirteen public hearings during which thirty-seven persons representing six Arab states and seventeen Jewish organi­zations gave evidence, and the holding of private hearings. A total of thirty-nine private meetings were held by the Committee; its four sub-committees and its three working groups held additional formal and informal private meetings.

The Committee produced a comprehensive, detailed, and honest picture of Palestine as of the spring/summer of 1947. Its three-volumes include extensive descriptions of the geography, agriculture, industry, and demographics of Palestine. Particularly striking, in a report that is the epitome of even-­handedness, is the obvious admiration the Committee had for what the Jews had managed to accomplish in so little time and under such adverse circumstances. They cite the extensive administrative infrastructure (a “state within a state”) that had been functioning for decades, the highly developed and advanced industrial and agricul­tural infrastructure, and how the Arabs had benefited from the success of the Jews. This, in contrast to the British administration’s efforts to improve “the economic and social condition of the Arab population.” The report notes that [previously]: “The country was disease-ridden, under-developed, poverty-stricken; it had the scantiest facilities for education, virtually no industry, and an indifferent agricultural regime. Internally it was given to lawlessness and it was open to the predatory attention of nomad bands from the desert.”

There is also extensive discussion of the Balfour declaration and of the meaning of a “national home” for the Jews. They stress that, “it is essential that [the Jewish people] should know that it is in Palestine as of right and not on sufferance.”

As with the Peel report from which they derived the principle of partition, the Jews accepted UNSCOP’s recommendations even if they were disappointed by the small geographical area allocated to the “national home.” This tactic is best described by British General Sir John Bagot Glubb, commander of the Jordanian Arab Legion, who, in his memoirs complains that ‘the Jews accepted every promise or accommodation they could get even if was far less than what they sought. They would pocket, and then leverage, each step in order to gain more. The Arabs did the opposite. They demanded all or nothing and would not compromise one iota, thus usually ending up with nothing. The Jews’ flexibility and patience strengthened them considerably’ (ps. 45-46). True to form, the Arab Higher Committee rejected the UNSCOP report entirely, claiming that the Jews had no moral or legal right to any part of Palestine and that the only possible outcome must be an Arab state in the entirety of Palestine.

After some revision, the report was translated into UN Resolution 181 (the Partition Plan) and, on November 29, 1947, approved by the requisite 2/3rds vote of the UN General Assembly. The Arabs immediately launched the 1948 War, initially as a “civil” war and later as a “conventional” war.

At the height of the fighting, the UN sent Count Folke Bernadotte to mediate a truce between the parties and implement partition. Bernadotte recognized that the events had overtaken written plans and recommended significant modifications of the UN partition resolution. In his Progress Report

“A Jewish State called Israel exists in Palestine and there are no sound reasons for assuming that it will not continue to do so…. The disposition of the territory of Palestine not included within the boundaries of the Jewish State should be left to the Governments of the Arab States in full consultation with the Arab inhabitants of Palestine, with the recommendation, however, that in view of the historical connexion (sic) and common interests of Transjordan and Palestine there would be compelling reasons for merging the Arab territory of Palestine with the territory of Transjordan, subject to such frontier rectifications regarding other Arab States as may be found practicable and desirable.”

A pragmatist, he recognized the territorial gains the Jews had made over the areas designated in the Partition plan but saw no reason for the establishment of another Arab state in Palestine in addition to Trans-Jordan. The report was dated September 16, 1948. The next day, in Jerusalem, Bernadotte was assassinated by (Jewish) Lehi terrorists.

A review of 100 years of determined peace-making efforts invites the obvious question: why is there still no peace? The answer is provided by the Prime Minister of Egypt who, in talks with Count Folke Bernadotte, explained that “no settlement could be acceptable to the Arab States or to Turkey and Iran which would involve the recognition of the right of the Jewish State in Palestine.” Jews can exist as a protected minority “but there must be no independent Jewish State in Palestine” (To Jerusalem, p. 26). It seems that only when this sentiment changes will peace be possible.