Based on the Letters of
Mordecai S. Chertoff

I wanted to express a deep gratitude for the program last week. The personal layers were powerful, the history interesting, and the presentation and discussion were engaging, thought-provoking, and special. We are still hearing reviews. I think your work is inspiring to the so many who have boxes of personal family history -- and it is incredible that you were able to dedicate your skills and times towards the sharing of your own.

Excellent presentation. My thermometer for judging the success of the program is: How many people leave before it is finished? Today there were none. I think people could have listened and listened more. The subject is, of course, amazing, but you were very engaging, personable and warm. Thank you and I do hope you really will come up with another topic and give us another lecture in the near future.

That was an awesome hour!

Thank you so very much for this personal eyewitness account! A terrific program!

The webinar went very well! Thank you! I think you had just the right amount of historical background. The map and the pictures were very effective. You picked some great incidents to relate, and it was all very moving. We greatly appreciate all of the time you spent with us preparing for this presentation. As you heard online and as people have written to me, the presentation was awesome.

Thank you so much for the wonderful program!!! We had around 47 people on at the end. Yasher Koach! We really enjoyed it.

Thank YOU! You were amazing!

...one of the best and most interesting presentations I have viewed throughout this entire period.

On this past Motzei Shabbat our shul, Kehillat Menorat HaMaor, was treated to a wonderful presentation by Daniel Chertoff recounting the eyewitness accounts of his father during the years leading up to the end of the British Mandate. Daniel's presentation was well organized. He used a very effective audiovisual presentation. Everyone was very impressed and many purchased his book, Palestine Posts: An Eyewitness Account of the Birth of the State of Israel.

“Mordecai Chertoff’s extraordinary letters are history at its most compelling – vivid, detailed, immediate. His account of the reaction of Jerusalem’s Jews to the UN partition vote is the best I’ve read anywhere. The narrative moves effortlessly between the historical and the personal, revealing a young man full of contradictions, self-absorbed and sometimes childish yet keenly observing the momentous events happening around him. At the same time, this book tells the touching story of a son’s search for his elusive father, reminding us that, in the end, history is always personal. Together, father and son have written a unique narrative that gives us the vicarious experience of participating in Israel’s founding. This book is a gift to the Jewish people.“ 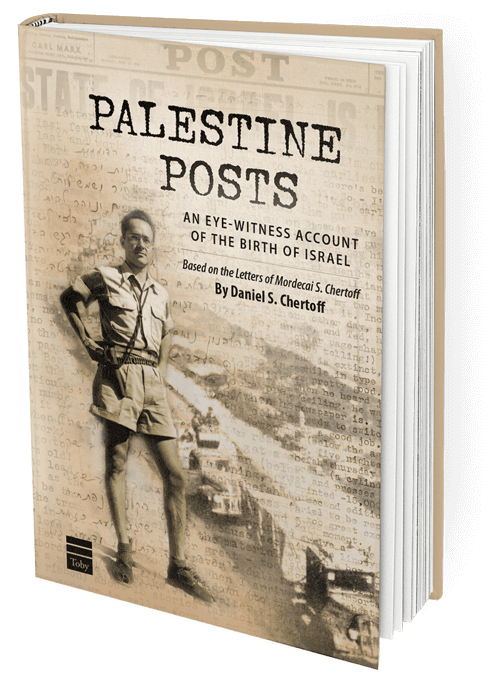 Mordecai Chertoff came to Palestine in 1947 as a twenty-five-year-old, determined to make his contribution to the emerging Jewish State. Between 1947 and 1950 he was variously, local news editor, foreign news editor and war correspondent for The Palestine Post, soldier in the Haganah and resident of Jerusalem.

In vivid and often moving letters to his family back in the United States (annotated and contextualized by his son), Mordecai describes the news of the UN vote for partition, the ongoing battles along the dangerous Jerusalem–Tel-Aviv highway and the attempts to break the siege of Jerusalem, the bombing of the Palestine Post, the declaration of the State of Israel, and, inevitably, the loss of friends. The correspondence, filled with details of everyday life in Jerusalem and encounters with famous and soon-to be famous people, includes historical information never before disclosed and ranges from passionate discussions about Zionism to the more personal drama of his search for a mate.

The book includes select letters, articles and photographs placed in their historical context in order to form a coherent narrative of the period. Extensive annotations identify and bring to life important personalities, events and concepts.

The book reflects the personal journey undertaken by the author to better understand a crucial period in Jewish history as well as his father as a young man and describes powerful encounters with people who appear in the book or with their descendants.

Daniel Chertoff worked in the investment industry as an analyst, as financial communications counsel, as a venture capitalist and as a senior executive in a large Israeli high tech company. He was an advisor to the World Jewish Congress and, before discovering his father’s letters, was happily writing his doctoral dissertation in English literature at the Hebrew University. Daniel is an Associate Editor of Partial Answers, an academic journal devoted to English literature and the history of ideas. He and his wife, Arlene, have lived in Israel for over 30 years and currently reside in Jerusalem.

Thank you! Your submission has been received!
Oops! Something went wrong while submitting the form.